On Synergies and Poor Judgement

The main challenge of corporate acquisitions is not to acquire, but what you do with what you have acquired – with sufficient strategic insight, focus, speed and vigor.
Here is a recipe on how to approach it!


This article is stand-alone, but I still recommend you to first read this one on Strategy and the Proper Use of M&A.


This article is available in a full pdf version.

So where does it go wrong…?

Start with reflecting on this quote from the CFO of a Norwegian public company:

This statement from an experienced CFO is much deeper than it may seem at first glance. The quote expresses something that few understand and even fewer live by: Successful acquisitions are not related to "pinch the last million" in the negotiations, not linked to having performed a flawless legal corporate due diligence – and failure is not caused by missing synergies! The degree of success is driven by the acquiring company’s implementation capability and focus on post-merger integration:


The main challenge of corporate acquisitions is not to acquire, but what you do with what you have acquired – with sufficient strategic insight, focus, speed and vigor

Is there hard statistical evidence for this assertion? No, not really – because the cases have too many variables and differing preconditions.

However, there is a great deal of research in the form of international surveys among business leaders, and vast amounts of academic qualitative analysis on the topic.

The conclusions, whether they derive from management interviews or best practice surveys, clearly point toward a confined set of success factors; i.e., why one succeeds when the outcome eventually is evaluated as being successful:

The other way – why it goes wrong – presents a similar and consistent picture.


Illustrations 1 and 2 below show the key sources of success and failure in mergers and acquisitions: 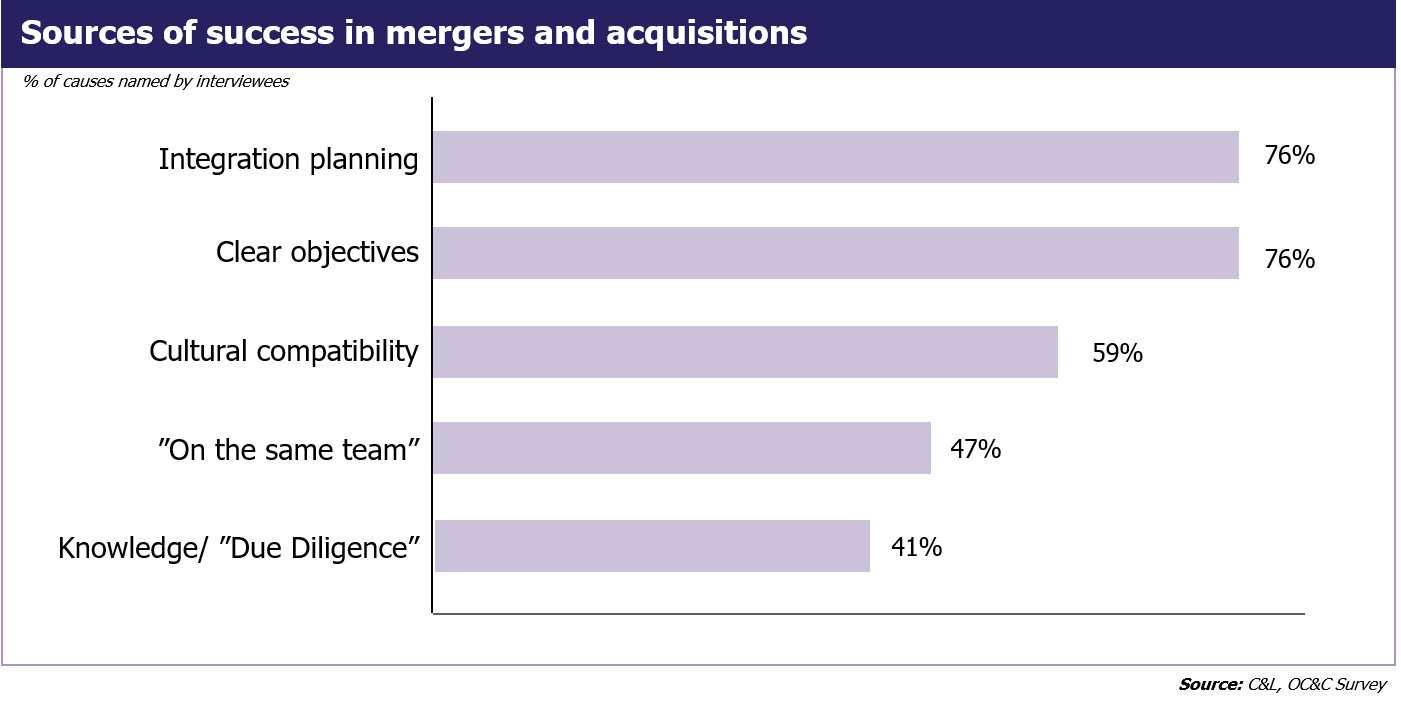 Illustration 1: The Sources of Success in Mergers and Acquisitions 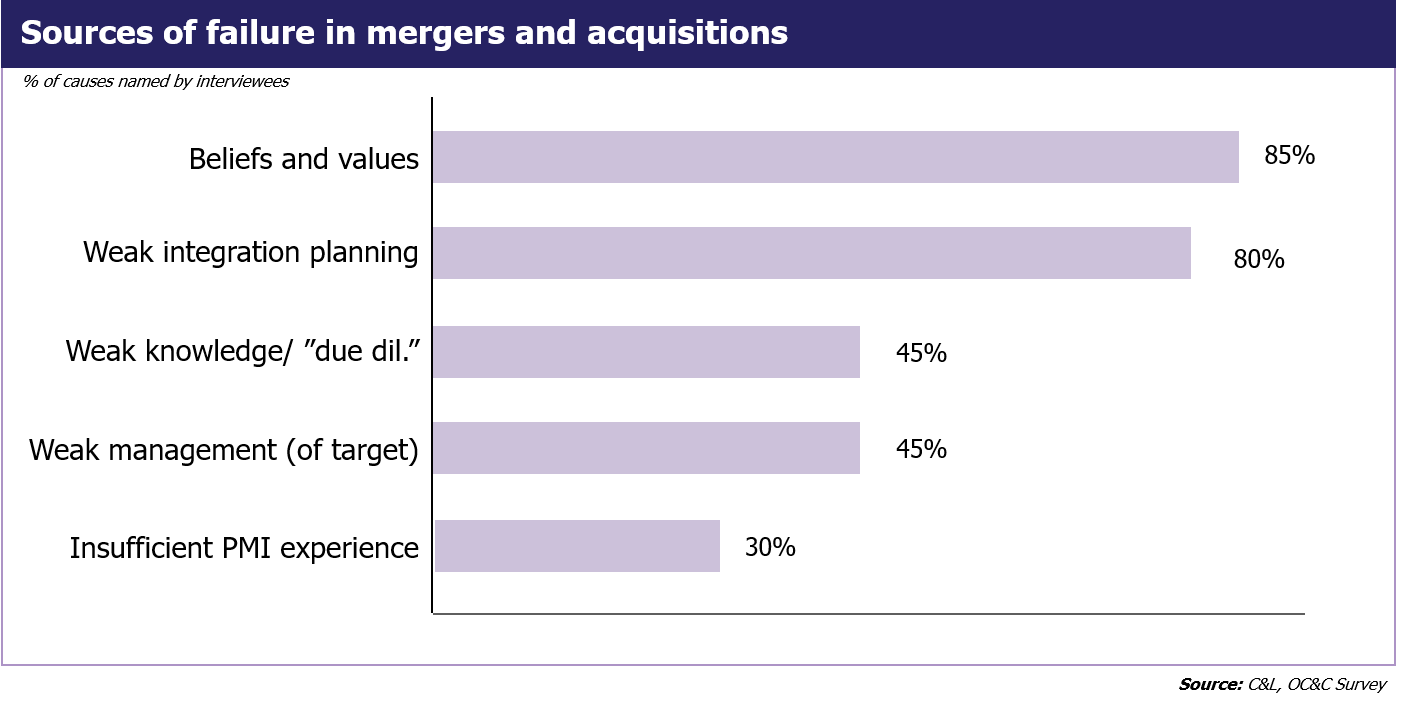 Illustration 2: The Sources of Failure in Mergers and Acquisitions

How, then, can we implement mergers and acquisitions in a better way?

There is a great deal of available information presenting uncomfortable statistics of unsuccessful acquisitions and mergers, but far fewer answers on how the percentages may be reversed.

Based on 35 years of personal experience (with well over one hundred transactions), I have compiled 10 rules for successful post-merger and/or acquisition integrations.
Try this recipe:


1. Base the acquisition or merger rationale on strategy, not on egos

There are only a few correct justifications for choosing acquisitions or mergers as preferred structural tools over, e.g., a strategic alliance. Entry barriers and speed requirements are two of them (see also this article on Strategy and the Proper Use of M&A Tools). Also, the selected business domain should be within a core business unit with scale economics and requirements for higher volume in order to compensate for the higher operational and financial risks that any acquisition (or merger) represents.

2. Set defined and specific synergy targets on a per share basis

Management teams often advocate merger and acquisition agendas based on a desire for greater resources, increased influence and compensation – rather than with the ambition to create greater value for their shareholders. Synergies are used as justification arguments by management teams facing inexperienced or naïve company boards.

Too few Nordic companies have an increase in earnings per share as an overriding management objective (except for listed companies, but even then this goal is partially obscured).

An objective of increased earnings per share is a key driver for maximizing owner values in a functioning capital market. But it is a demanding and difficult objective to manage, and therefore uncomfortable. It is easier to rationalize mergers by emphasizing the increase in total revenue, total profits and strategic benefits – without sufficient emphasis on ownership dilution.


Set an increase in earnings per share to offset merger risk as an absolute precondition. This is certain to affect the integration plans

3. Establish the project team based on experience, not interest

Acquisition projects have their own psychology. There is high visibility, status, pace – and participation in these projects are perceived as being particularly interesting by managers. Everybody wants in! However, almost no other area of business development is more dependent on accumulated experience; a critical success factor is to have made enough mistakes early enough – to understand when they were made and why they occurred.


Set up a project team with sufficiently accumulated mistakes

4. Ensure continuity in the project organization during and after the acquisition

The psychology of mergers and acquisitions drives a notion in the project team of having created significant value when, after months of hard work, the agreements are finally signed. But the exact opposite is the truth: what has been created is increased risk! The funding has been committed – without any return so far – and the integration plan for how to recapture the value of the acquired business has not yet been finalized. In addition, the project has been intensive and time-consuming – and line management tasks have been suffering along the way. Consequently, the project organization is dissolved after contract signing; everybody relaxes – and negative influencers take hold of the situation.


Ensure continuity in the project organization during and after the acquisition, including for the due diligence team

Illustration 3 below shows the 10 guidelines for successful post-merger integrations: 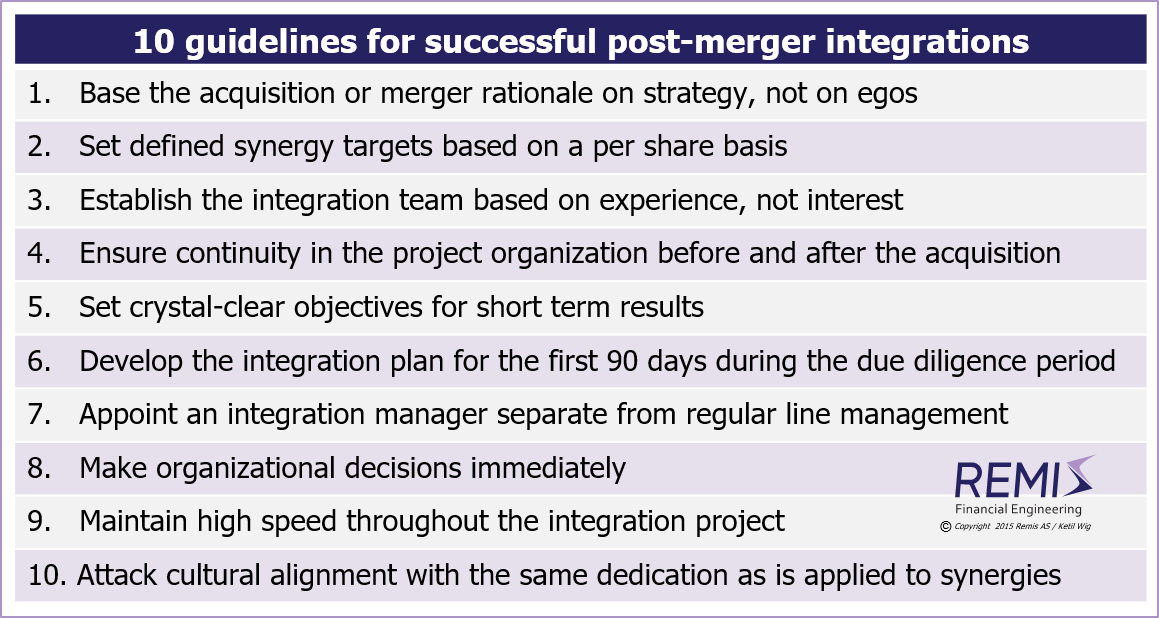 Many Scandinavian managers live in the delusion that it is unwise to flag requirements for swift efficiency gains, cost savings or downsizing – as this may create organizational unrest. Again, the opposite is the case! Most organizations are far more advanced in their understanding of the situation than their management teams give them credit for. Middle management of an acquired company understands perfectly well that the acquisition drives the need for increased earnings. Top management loses credibility and respect when not communicating this message, thereby being interpreted as apparently not having decided how the investment shall be recovered.


Everyone understands the need for increased earnings and early wins based on well-founded and thorough justifications. Be honest and communicate this message immediately

6. Develop a detailed integration plan for the first 90 days during the due diligence period

Due diligence processes are risk analysis projects of an auditing and legal nature, where companies typically undergo 1-3 weeks of 'health check' analysis based on checklists. This is standard procedure. What is less obvious, is to use this period to develop a short-term and detailed integration plan so that the foundation of an effective post-merger integration project is completed before the deal is signed.

This means that other team members should be working with other checklists which are not related to due diligence; e.g.:

A common misperception is that the line manager should also be the integration manager. This is normally unsound because many of the necessary post-merger integration actions are non-recurring and thus add to the normal operational workload. Dividing the workload ensures that customer relationships, supplier relationships, sales and production run at full speed and without disruptions. However, equally important is the tactical dimension. Having separate integration and line managers enables a process where the integration manager’s “fix-it” attitude and possible wear on the organization do not represent long-term consequences for how the line organization is being perceived.

Please note illustration #4 below.
The organization knows that changes are coming – they just do not know for whom. Therefore, the use of “sufficient time to have a thorough and contributing process” has the opposite of the planned effect. The delay creates uncertainty, turmoil and corridor gossip – and cultural frustration rather than cultural integration. Skilled headhunters know these effects and consequently they actively use these transition periods to their benefit!


Illustration #4 below shows the importance of handling “soft-side” for successful post-merger integrations:

Therefore, communicate clear messages to all key individuals immediately, and always before a weekend or a holiday – never afterwards. Use days to develop a new organizational plan, not months. The basis for the new structure should have been prepared during the due diligence process, so it should basically be ready. You always know far more than you think you know – it’s a matter of taking the consequences, so do it!


Have a new organization plan early: within days, not months

Speed is an important driver when focusing the whole organization on operations and the road ahead, rather than looking for faults and questioning the merger’s advisability. High speed presupposes that the analysis has been done in advance, so that increased momentum will not compromise decision quality.


Maintain momentum. Speed is a value in and of itself that builds cohesion and identity

10. Attack cultural alignment with the same dedication as is applied to synergies and reorganization

Compose all teams and workgroups with representatives from both organizations – but only with representatives who will stay on. Break down cultural differences by establishing and promoting the policies and values upon which the future leadership should be based. Establish a culture team that identifies and names cultural differences. Develop an action plan for cultural coordination and ensure broad internal distribution of the project results. Make monthly audits of progress, deviations and corrective measures in relation to the plan.


Manage cultural coordination as a top management priority, with the same dedication as applied to synergies and reorganization

Nobody likes to be acquired!

Acquisitions and mergers always represent transfer of control to the acquiring company – which is, said or unsaid, perceived as a loss of power and positions of the other party. The consequences of this simple perspective should be to implement the integration process in a way that focuses the energy forward, without creating feelings of loss and stirring negative attitudes.

As of today, the interrelation between many unsuccessful acquisitions and the fundamental causes behind the statistics are partly uncertain, misunderstood and misty.
They need not be. We have sufficient knowledge!

For a full pdf version of this article, see White Paper #1: Post-Merger Integrations - On Synergies and Poor Judgment.

Also read the separate article on Strategy Implementation and the Lack of Results, on Developing High Quality Business Models; on M&A strategy, on Strategic Alliances and Joint Ventures, on Buy-Side M&A, on Sell-Side M&A, on Financial vs. Industrial Ownership and about M&A Process Management.

See Download Center: White Paper #2: Strategy - and the Proper Use of M&A Tools.
A LinkedIn article with a shorter web version of the same white paper is available here; White Paper #3: Strategy and Implementation - and the Lack of Results; White Paper #5: Buy-Side M&A (mergers and acquisitions); White Paper #6: Sell-Side M&A (divestitures, trade-sales and mergers); White Paper #7: Should You Choose Financial or Industrial Investors/Owners?; or White Paper #9: A 15 Step Recipe for Developing Your High-Quality Business Model.

Industries and Sectors With Experience and Client References:

Please call me (+47 934 85 000) or send an email (ketil.wig@remis.no) if you recognize yourself as being in one of the following situations:

... and you are looking for a highly-qualified local resource with excellent references ...

Ketil Wig is the owner and managing partner of Remis AS. He previously developed and managed the niche advisory firm Rokade AS within M&A and post-merger integrations/turnarounds, which was acquired by KPMG in 2012. From 2013 up until August of 2015, he served as the head of M&A Service Lines at Deloitte Norway. His previous experience includes McKinsey & Co., Andersen Consulting/Accenture and a number of management-for-hire assignments in Norway and internationally. Ketil Wig holds a MSc. in Engineering degree in physics/computer science from the Technical University of Norway (NTH/NTNU) and an MBA from Stanford University. He currently works on corporate advisory assignments and as a board director. For more information, see Linkedin Profile